“Fans of Redwall and the Warriors series will love this heroic tale of good versus evil in a subterranean society of rats. The world of the Catacombs is so compelling readers will wonder if it really might exist under our city streets. Expect great adventures in Nightshade City.”

Rick Riordan, author of the Percy Jackson and the Olympians series

Read full reviews of the series from kirkus

“Wagner reveals lingering secrets, along with intrigue, rivalries, revenge, and redemption in the satisfying third book in this complex animal fantasy series.”

“Fantasy lovers who enjoyed the first book will be delighted by the second.“

“The third volume of the Nightshade Chronicles  is as entertaining as it is satisfying.” “Fast-paced and full of intrigue, this is one fantasy lovers won’t want to miss.”

“Fans of Brian Jacques's "Redwall" series (Philomel) will enjoy another fast-paced fantasy with dastardly villains and unsuspecting heroes. As in the first book, Wagner has built up to a crescendo climax with a big cliff-hanger that will keep fans clamoring for more.” 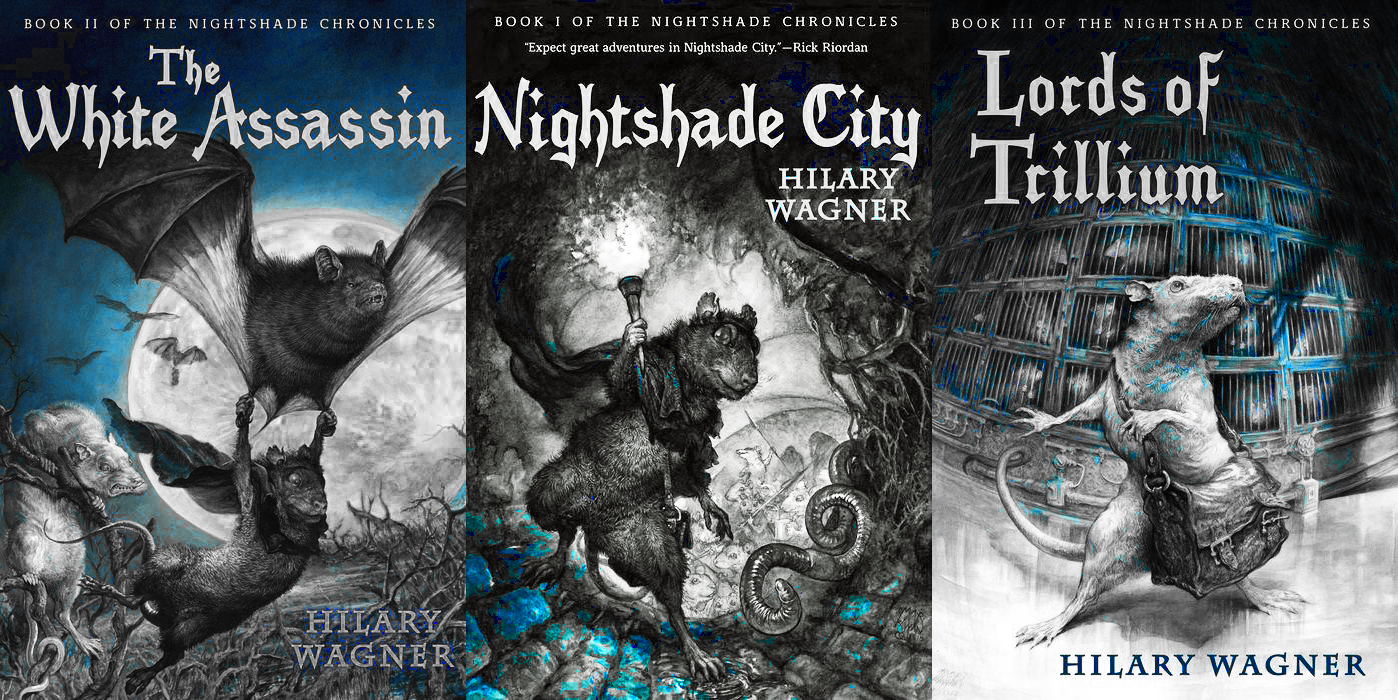 Booklist Online Exclusive:
Danger is intense for the Nightshade rats when this book opens following the cliff-hanger of The WhiteAssassin (2011), and with the evil Killdeer only a distant memory, who or what could be causing this harmto rat kind? Is it really the humans above ground and their scientific experiments, hero Juniper wonders,and could it be possible that their fate truly lies in the paws of the unreliable lab rat Billycan? Wagnerreveals lingering secrets, along with intrigue, rivalries, revenge, and redemption in the satisfying thirdbook in this complex animal fantasy series.— Andrew Medlar

The third volume of the Nightshade Chronicles (Nightshade City, 2010; The White Assassin, 2011) is as entertaining as it is satisfying. To readers’ surprise and eventual delight, former uber-villain Billycan is the hero of this installment. Released from the control of malevolent and manipulative humans, he atones for his past misdeeds by arriving in Nightshade City just in time to help save it from an evil that has been brewing within. Next, feisty Billycan helps the Nightshade rats track down some of their number who have disappeared, most likely into the clutches of scientists resuming their dreadful experiments. What the brave explorers find will give them answers to many of the questions that have surrounded their existence—namely, what makes these rats superior to others, and what do the humans want from them? There’s not as much character development here as in the earlier books, as this volume is dedicated to unraveling big mysteries and tying up loose ends. In fact, there’s so much going on that if it’s been a while, readers may need to return to the first two volumes to make sense of the overarching narrative strands. But who will mind? Fast-paced and full of intrigue, this is one fantasy lovers won’t want to miss.

This sequel to Nightshade City (Holiday House, 2010/VOYA October 2010) finds Juniper and his clan battling Billycan, the white lab rat and commander who survived the bloody war that destroyed evil High Minister Killdeer and restored peaceful community life among Trillium rats. Billycan has escaped to a distant swampland where he controls a band of primitive rats, and plots revenge and conquest, training his new army for imminent attack. Unknown to Billycan, Juniper and his group have located him and infiltrated the swamp rats, planning to capture Billycan and administer a truth serum. Complicating matters are Billycan's albino son, Julius, raised as Juniper's son without knowledge of his father, as well as evidence of a traitor in their midst who supplied detailed plans of the city to Billycan. The White Assassin introduces a few new characters and continues the thread of Nightshade City, including the use of other animals, like snakes and bats, who support and assist the Nightshade rats in their adventures. The reader is reacquainted with favorites from the first novel, older now, and discovers that Billycan, who was drugged and abused as a young lab rat, is a more complicated character than at first appears. Fantasy lovers who enjoyed the first book will be delighted by the second. –Laura Woodruff

Three years have passed since the underground city of Nightshade was liberated by intelligent and long-lived rats led by Juniper in Nightshade City (Holiday House, 2010). Now, the White Assassin, Billycan, has returned ready to exact revenge. He rules over a horde of simple-minded, savage swamp rats willing to do his dirty work. Carn, whose family was murdered by Billycan, intends to go undercover and capture him so that Juniper can use truth serum on him to find out the plans for overthrowing Nightshade. Carn meets smart and pretty Oleander; teaming up with her and her group proves both beneficial and dangerous when Billycan is captured and dark secrets emerge. When Billycan's son, Julius, who is being raised by Juniper, is kidnapped, alliances are broken, lies are exposed, and lives are lost. Much of the story alternates between Billycan's emerging memories from the time he spent in an experimental lab and the present-day Trillium rats as they try to uncover the truth regarding Billycan's past. Readers not familiar with the first book may find themselves needing further background information to keep the vast array of characters straight. Fans of Brian Jacques's "Redwall" series (Philomel) will enjoy another fast-paced fantasy with dastardly villains and unsuspecting heroes. As in the first book, Wagner has built up to a crescendo climax with a big cliff-hanger that will keep fans clamoring for more.—Michele Shaw, Quail Run Elementary School, San Ramon, CA

Vincent and Victor Nightshade live in the underground rat city known as the Catacombs, home to unusually long-lived and intelligent rats. Their father, Julius Nightshade, was once a leader of the city, but now the evil High Minister Killdeer and his vicious helper, Billycan, have taken control and terrorize its inhabitants, demanding food as tribute and forcing orphans to serve in their army or kitchens. When Vincent and Victor try to escape Killdeer's clutches, they meet Juniper Belancort, a friend of their father, who now leads the resistance against Killdeer. Along with Juniper's niece, Clover, they are drawn into the struggle to free the rats from Killdeer's reign and bring them to a new home, Nightshade City. The three help develop a plan for the rebel rats and their ally earthworms to tunnel into Killdeer's palace and confront him directly, leading to a variety of underground battles. Wagner has created an atmospheric and action-filled tale, and her balance of strong male and female protagonists is appealing. Fans of Erin Hunter's "Warriors" books (HarperCollins) may enjoy the animal action and touch of romance, and the authentic rat and earthworm abilities add to the strength of the story.
—Beth L. Meister, Milwaukee Jewish Day School, WI

Fans of Suzanne Collins's Underland Chronicles and Brian Jacques’s Redwall series will enjoy this fast-paced adventure set deep in the Catacombs, where a community of intelligent rats lives in peace and harmony. Or at least they did, until two vicious rats, Killdeer and Billycan, led a coup that turned the democratic society into a dictatorship and its citizens into mistreated and oppressed subjects. Underneath all this misery, however, there is hope. A gang of rebels is creating a new city and welcoming refugee rats into its safety. The fate of the new city rests heavily on three orphans, brothers Victor and Vincent and Clover, a young female who has been secretly educated despite Killdeer's strict rule against educating girls. Can they help the rebels overthrow the tyrants, and can they do it before poor Clover is married off to Killdeer? The themes of love, loss and loyalty resonate through the novel, and the moments of darkness and violence are ultimately overpowered by hope and redemption. A good story well-told.

“Fans of Redwall and the Warriors series will love this heroic tale of good versus evil in a subterranean society of rats. The world of the Catacombs is so compelling readers will wonder if it really might exist under our city streets. Expect great adventures in Nightshade City.”

Rick Riordan
Author of the Percy Jackson and the Olympians series